After getting married, at my husband’s house this was a everyday lunch. My mother in law makes the best ragi mudde traditional way( adding ragi flour directly to the boiling water). For my husband this is the best and satisfying meal of the day.  After we got married I came to know that my husband loves mudde, so after coming to the states I called my MIL  and asked the for the recipe and method to do mudde. I did try and it was a big flop. It seems easy adding ragi flour to boiling water and keep stiring….but ragi forms to a hard lumps if not stired properly. I didn’t want to give up….so tried each week..but I couldn’t make it.  My mother does it slightly different by mixing water to ragi flour and then adding to boiling water(to avoid forming lumps). Next time I tried this way and it came out fine. So for some time I did make using my mothers method. After few years I wanted to do MIL’s method and tried again……still couldn’t do it and to this day I can’t. Still thinking to try and make it traditional way …..

After many many tries from last 5 years now I can confidently say I can make Ragi mudde but not the traditional way.

So here is how I make it.

Measurement is important to get right consistancy.

Take 1 cup fo ragi and equal amount of water and mix it to a smooth paste.

Consistancy should be thick as the picture above when mixed with water.

Keep stiring it untill it all comes together(I use wooden spatula to stir it). Then kneed and transfer to a bowl/plate. Allow it to cool a bit. 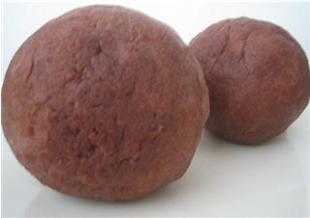 By wetting you hands with little water, press the dough and make them to a round shaped balls. Thats it Ragi mudde is done.

For first timers…..this method works wonderfully. Let me know if any one tries this way.